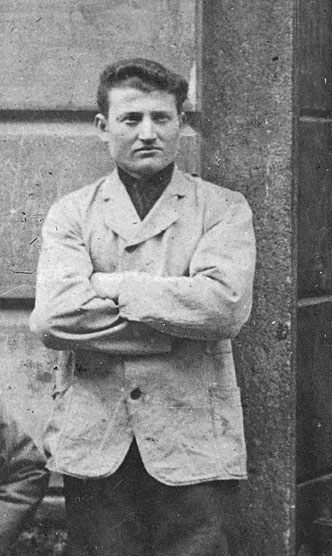 Giuseppe Cimbali opens a copper-processing shop in the centre of Milan. The production of coffee machines branded LaCimbali begins (Rapida).
The technology of that time is based on a vertically positioned boiler,
hence the name of column machines, mainly heated by coal or wood. 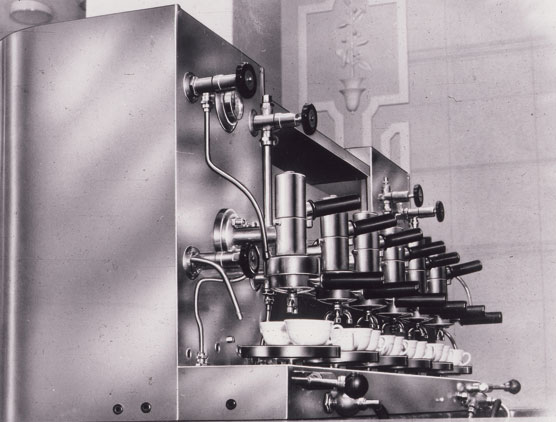 LaCimbali launches Albadoro, a machine with two independent vertical boilers
that can feature from 3 to 6 coffee groups,
for the first time positioned at the front of the machine, and the cup-warmer.
Positioning the coffee groups at the machine front makes working more ergonomic:
you no longer need to move around the machine to work.

With the spread of electricity and the advent of the lever to produce coffee cream,
also LaCimbali's machines undergo a technological revolution. (Ala, Gioiello and Brillante).
The lever is a real technological revolution because it creates the necessary pressure
to extract everything that gives taste, aroma and body to a cup of coffee. 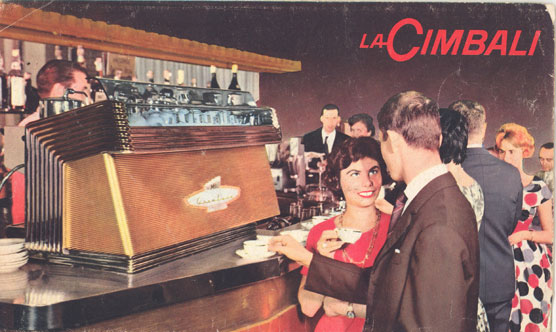 In 1955, the company launches Granluce, equipped with the hydraulic group
(patented) able to facilitate and reduce the barista's workload because makes the delivery completely automatic.
This innovation allows LaCimbali to enter new foreign markets.
The hydraulic group replaces the pressure exerted by the lever spring with that of the water mains,
which reaches the 9 bars necessary for the proper extraction of the coffee-cream thanks to a system which multiplies it. 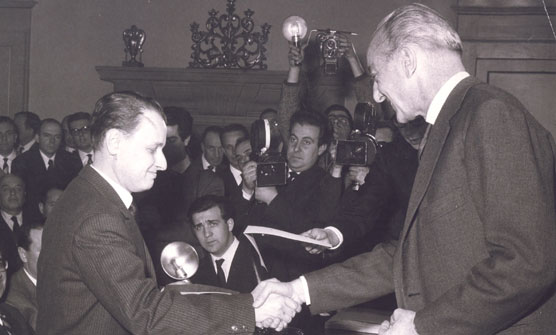 In 1962, Pitagora wins the prestigious “Compasso d’Oro” for its strikingly modern design,
characterized by simple, clean lines, created by the Castiglioni architects.
For the first time, stainless steel, colour and silk-screen are used,
all characteristics which allows it to gain unprecedented commercial success.
Pitagora is still today the only coffee machine to have won the “Compasso d’Oro”.
Pitagora, with its strict lines, laid the path for industrialisation,
that is to say the reproducibility in series of LaCimbali products. In the late 60s, Cimbali begins to experiment with complete automation and presents Superbar,
its first superautomatic machine built specifically for use in bars.
A superautomatic machine allows even the less experienced barista
to prepare excellent coffee cups starting from grinding
the coffee beans up to discharging coffee grounds. 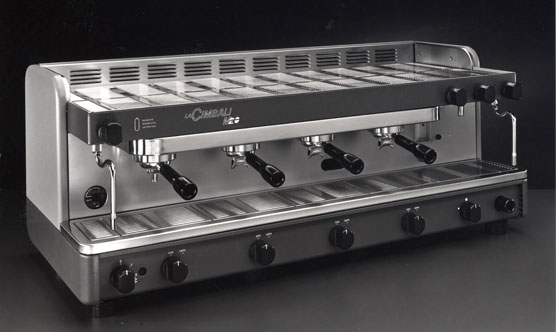 In these years the company, in the collaboration with Rodolfo Bonetto, designs historic models such as M15 and M20.
In the M20, controls and electrical section are placed in the base in order to make the barista's work more ergonomic.
With these models the machine working side becomes more important than the rear bodywork. With the M15,
which is available in the hydraulic, lever and direct injection versions,
LaCimbali introduces the novelty of the electrovalve. 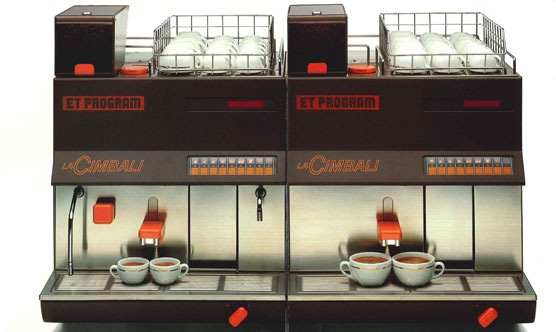 This decade sees the launch of the first traditional machines equipped with an evolved microprocessor
that can manage their main functions and the machine automatic switching on and off
almost anticipating the current energy saving requirements. (M30, M31, M32).
From now on electronics will become one of the focal points of both the traditional
and the superautomatic machines, and together with the continuous research
into ergonomics of use, the flagship of the company Design and Research and Development departments. The Dolcevita series of superautomatic machines further refines the concept of total automation:

the machines ensures excellent and consistent in-the-cup results
contributing to the spread of the espresso culture in the world,
especially in those markets that are not accustomed to the taste of Italian coffee.

This technology initially is successful especially in those markets where the skills
in the preparation of espresso and cappuccino hasn’t got established traditions. 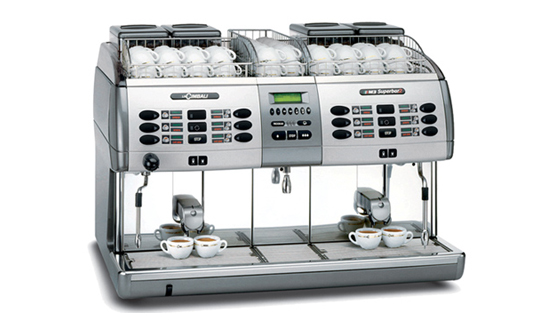 This decade sees the launch of the first traditional machines equipped with an evolved microprocessor
that can manage their main functions and the machine automatic switching on and off
almost anticipating the current energy saving requirements (M30, M31, M32).
From now on electronics will become one of the focal points of both
the traditional and the superautomatic machines,
and together with the continuous research into ergonomics of use,
the flagship of the company Design and Research and Development departments. 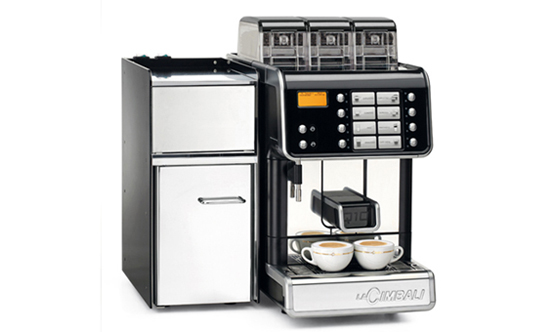 Cimbali launches Q10, a compact superautomatic machine which allows creating a richer menu
in line with customer’s contemporary needs also thanks to the use of instant beverages and,
from 2012, of a special refrigerated unit equipped with a device for the preparation and delivery of cold frothed milk. 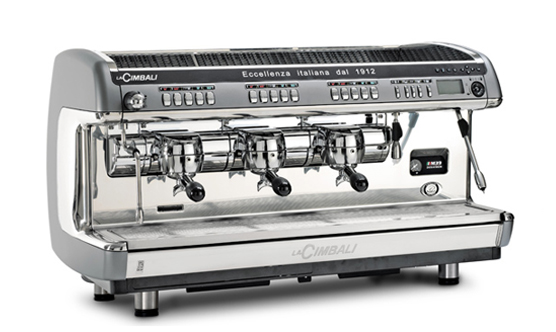 The M39 TE opens a new chapter because of its advanced electronics,
which allows, for example, extensive connectivity (Wi-Fi and Bluetooth)
and its technological innovations among which the Turbosteam Milk4 stands out 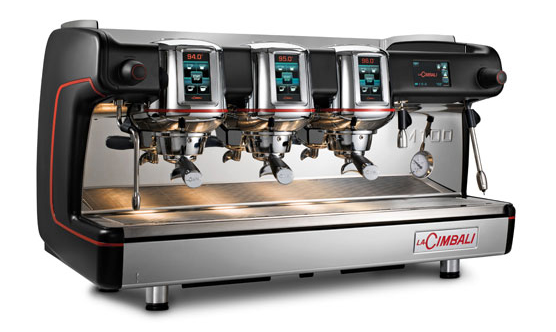 Evolution of the M39 series, the M100 features thermocontrolled independent coffee boilers
where the preheated extraction water arrives (GT system),
the HD system to personalise the extraction water pressure and touch screens for the beverage selection
as well as advanced electronics, a USB port, the Smart Boiler technology and the Turbosteam Milk4. 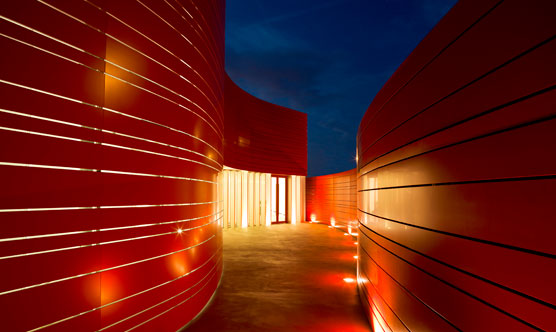 In 2012, Gruppo Cimbali celebrated 100 years of activity by inaugurating MUMAC,
the first museum entirely dedicated to the professional espresso coffee machines.
It collects 200 pieces and exhibits 100 machines from the Maltoni and Gruppo Cimbali Collections
in a narrative itinerary that is divided into six rooms from 1900 to the present days,
making it the world's largest exhibition of professional espresso coffee machines.
MUMAC is also MUMAC Academy, a proper school that provides education and training
to satisfy the different market needs as well as tasting and sensory evaluation courses
on the quality of coffee, open to companies and professionals but also to coffee lovers and enthusiasts.

A journey that sets out from Milan and reaches markets worldwide,
with roots that spring from the power of industrial design.
LaCimbali: more than just espresso, with a varied range of beverages supplied every day,
ready to satisfy international tastes and trends.